With amazing timing Hashers arrived at the the Round Mountain lookout at about the same time. Thrust was there to frantically keep cars away from the gourmet table so as to avoid dust covering our fare.

The pack headed up the trail, straight up I should say, to the top of Mount Claude. GoneAgain and Foghorn were last to leave the carpark and didn't quite make it to the champagne up the top moving at GoneAgain's leisurely uphill coughing pace. 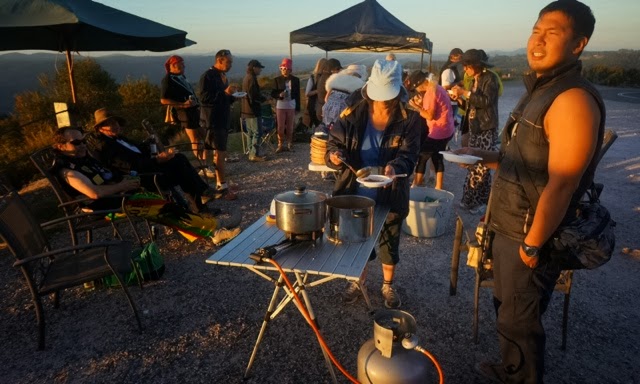 Back down the hill, again miraculously well timed as we all got back within minutes of each other, we attacked the home-made sushi and rice paper rolls that were waiting for us. We impressed not only ourselves, having such an extravaganza at hash, but we also impressed the virgins amongst us.

When the sun went down it got nice and cold up top and after we ate lots of everything and the candles were burned on both sides we all disappeared home,... Home, to what was once called civilisation, but now seemed rather down to earth and dull compared to what we just experienced. Thanks TripleTop and crew!

Next run is the annual Motorbike Run starting from Crow's OzRock Inn in Ulverstone where the motorbikes leave at 6pm. Runners meet at the roundabout BBQ park in Port Sorell at 630pm, the usual time. The run is of course hosted by Burnie's premium Hashers Ratchet and Knickers.

Also don't forget this weekend is the Breaking Wind in the Willows High Noon for Full Moon at the Mole Creek Hotel. so get your acts together for 18th January. 12 noon!!!