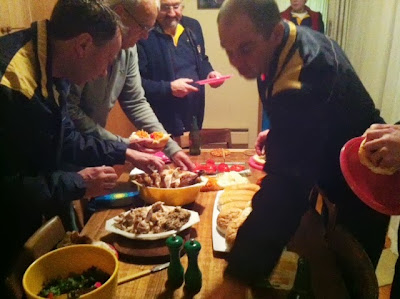 Noone showed up with a frog at BedPan's place! In fact no one wanted to get wet on the trail except for Guardy the frogman. Guardy followed the dough (flour?) into town and through the Rooke Street Mall, got some looks from the local constabulary and scuffled on smilingly through the puddles. Meanwhile nine brave hashers enjoyed a game of tenpin bowls at the unlicensed bowling club while Bedpan  was reheating the pumpkin soup Fanny May made out of BedPan's homegrown pumpkin. Bedpan had already plucked and baked her chickens so that she had ample time to prepare the avocados, tomatoes, buns, mayo,.... and select the music.

Dint not being much of a pumpkin soup fan was treated to a sachet io chicken noodle soup, thoughtfully provided by FannyMay who knows what her men like (and don't like). Dint meticulously fished out the noodles.

Maybe it was the unpredictable music that caused Bedpan to have a stroke of genius brainwave, she wants a pet you can turn on when you come home, and turn off when you go away for the weekend. Guardy jumped up enthusiastically; 'pick me pick me pick me!'. So she got her frog in the end. But how do you turn him off? We thought GoneAgain in his undies might do the trick.

Cake and port for desert, no raffle again - so we were all winners I suppose... Well, all except GoneAgain as he got the lowest score at TenPinB and Bastard as he was disqualified from winning as surely he must've cheated in order to smugly beat us all.

Next run will be in the mud from the quarry on top of Kelcey Tier at the Allison Track car park (Cistern better be there) out of Spreyton (up Durkins Road). Bring a torch!