Here we go for a second time.... Too tired tonight I think...

Yes, we did the Invasion Day Run. We invaded Dint and Koff's local playground and ran 4.5kms around East Devonport. We had down downs, cussed a lot, accused each other of having bad names, bad manners, bad spirits, being competitive, not wearing odd socks. Lousy prizes were won, except for Maggie who won valuable collectible beer glasses for his garage sale.

Next Monday's run from the UDCC, turn first left after the bridge and follow that for a mile or two till you get there. If that is too complicated follow the Google map directions to the Ulverstone District Cricket Club HERE. Make sure you bring a pressie for Cheese, the Birthday Hare. HERE is his wishlist.
_______________________ 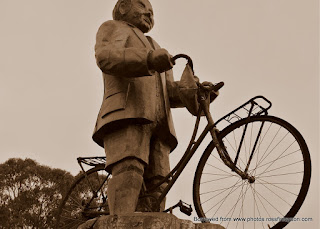 Also, Sunday February 10 is coming up soon. Time to get the mountain bikes dusted and pumped up and ready for the Sheffield to Latrobe backward Tassie Trail ride with GoneAgain.
* Meet 10am at Well's carpark in Latrobe where we'll sort out the bike transport to Sheffield.
The ride is 95% downhill to Syke's Sanctuary for a muesli bar, and on to Railton for a picnic lunch. Then a 5-10km moderate climb, followed by some potential trespassing (depending on whether the land battle over a 100m laneway was won, see page 24 of the Ammendments) followed by more downhill through plantations to Latrobe for beverages of sorts. For more info email the cycleguru@dhash.com.