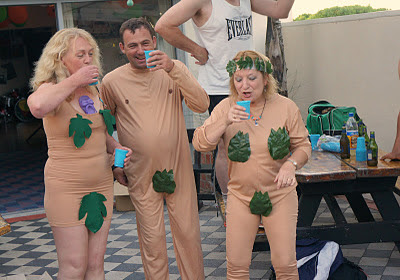 The 1600th run, celebrated on the 1599th run, saw people scrambling out of our way as Adam and Eve escorted the pack through the Ulverstone neighbourhood. More Adam and Eve's came out of the cupboard after the run in the safe harbour of the Oz Rock Inn. Good run/walk through the bushes at the foreshore of 'the Stone' and a Garden of Eden style feed (finger salad and finger BBQ), a bottle of wine to share among the 12 wine drinkers and a couple of cases of beer for the real men complemented an all up good evening. The evening came to an abrupt end when inappropriate prizes, from our major sponsor (Adam and Eve Adult Superstore, Fyshwick, ACT), were raffled out. We think winners were keen to go home and try them out! No snakes were harmed during the evening. Pics here.


NEXT RUN set by Dint from Robert's carpark under the highway at 1 Formby Road.OnOn at Church Street, East Devonport.