Feels on Wheels in the Grotto 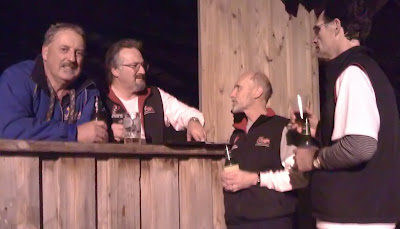 A large contingent of keen walkers assembled at Otto's Grotto ready to be enterained. GoneAgain forgot to bring his mind and his rollerblades and thought he had lost it altogether when Coconut introduced herself as Coconut from Devonport. Amazing what happens when you miss a few runs. Like coming home and some pretty stranger opens your own door and says she lives there.

Anyways, the pack was uncontrolled, not even stopping for master checks. The latter was noted by Duly aka Dini.
BBQ tasted good, whatever it was that was served in the dingy dark, grimey and thus befitting, one tea candle per table surrounds of the Grotto.

Next run is at Cheese's abode at Amherst Street in Ulverstone.